What’s My Old Radio Worth?

What’s My Old Radio Worth?

The actual value of any ‘vintage’ or ‘antique’ radio - usually thought of as being pre-1950, but could be stretched a bit, say through to the mid-1960’s for early-transistor sets which are now quite collectible - is difficult to assess with any precision.  Like most things in the marketplace, they are only worth what someone is willing to pay at the time and place you want to sell it.

The market for vintage radios is constantly moving.  Some factors are considered below, however, as the decades go by, one of the most influential ‘drivers’ in the market, that of nostalgia and familiarity with the technology, is changing: in the latter part of the last century and the first few years of this one, many of these sets were in the childhood memories of folks, and being able to posses and operate such a radio in later life satisfied a nostalgic urge.  Demand for 1920’s/1930’s sets was therefore high and this was reflected in the prices.  As time moved on, that generation started to pass away or were no longer in a position to buy such radios.  Focus started to move to radios that were nostalgic to the subsequent generation(s), ie. those that spent their youth in the 1940’s through 1960’s, when more compact sets of different construction and technology prevailed.  This generally leaves a much smaller demand for the older sets, mainly limited to ‘hardened’ collectors and technically-minded individuals with an interest in vintage electronics.  Larger market and financial factors also play into the pricing, eg. the market crash of 2008 had a significant impact on prices being paid for vintage radios, and the market for them has remained generally somewhat depressed ever since.

Another factor is that communications technology itself has changed drastically over the past two or three decades, in particular, with the advent of high-speed internet.  This has resulted in a vastly-reduced number of radio stations broadcasting on both the ‘Broadcast Band’ and the Shortwave bands, with many broadcast companies now streaming their programs via the internet instead of through radio transmissions.  The result of this is that there is much less to listen to on radios (vintage or not) and this also makes possessing them less-desirable.  This situation is exacerbated by the large amount of radio interference (buzzing, hissing, and other unwanted sounds forming a constant background noise) caused by computers, ‘wall-wart’ power supplies, LED lights and the like that was not present when radios were ‘king’ of media.

There are several guides on pricing available, eg. ‘Collector’s Guide to Antique Radios’ by John Slusser that can be consulted, however, the cited prices are only indicative for when that particular guide was prepared, and these seem to rarely reflect reality.  If you do not have such a guide or your model is not listed in the one(s) you have, consider these factors: 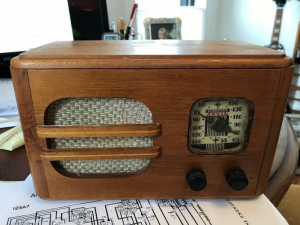 As noted above, you can monitor Ebay sold prices to see what similar sets to yours are fetching, though it can be very time-consuming waiting for a particular model to appear.  Also, check out this web page and this web page for more thoughts on this topic.