This compilation of information on Chisholm Industries Ltd., would not have been possible without the great help from Edward M. Chisholm’s son, Jim Chisholm, and his wife Sherry Chisholm, who were interviewed by Gerry O’Hara and Gerry Taylor, representing the Society for the Preservation of Antique Radio in Canada (SPARC) as part of a project to prepare a display featuring Chisholm radio and TV for the SPARC Museum in 2008.  Jim and Sherry donated many valuable family items to the Museum's 'Chisholm Project' which included photo’s, newspaper adds, letters, resume’s and copies of articles written by others in the past.

The founder of Chisholm Industries Ltd., Edward Chisholm, came from a modest family of farmers of Scottish Ancestry, living in Nova Scotia.  Edward Chisholm was born in Truro, Nova Scotia, in 1908 and he had two sisters.  The Chisholm family moved to the Chilliwack area in the Fraser Valley when he was just a boy. The family continued farming in the ‘Dairy Business’.

The Chisholm radio and television product line, was a 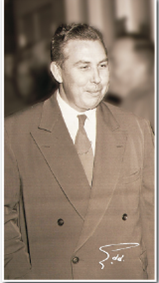 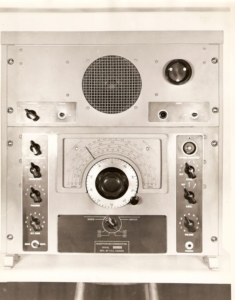 By 1939 the Company was heavily into manufacturing and designing of commercial radio equipment, such as  Ship-to-Shore Receivers, Transmitters together with smaller portable radios for the Marine and BC Forest Industry.  The wholesale parts distribution was discontinued in favour of manufacturing.  In 1940, the business moved to a new location south of the downtown core, to 4515 Main Street, into a building with approximately 12,000 square feet of space.

Both of Edward Chisholm’s sons worked in the family business from time to time, Jim more so then Gordon. After a couple of years of collage,  Jim joined the family business and learned from the ground up.  Jim Chisholm fondly speaks of his father, and say’s “He made me start at the bottom - I started working for dad by sweeping the floors at VRL”.  Jim Chisholm complemented the family business by training in a mechanical engineering background.  When Edward Chisholm retired, Jim went on to create the business of Glenayre Electronics Ltd. which was also a very successful company.  The oldest son, Gordon, spent some time in his dad’s business in the design department, as well as in marketing and sales.    However, Gordon’s passion was for the logging industry, where spent most of his working career.

During the Second World War, the company was commissioned by the Canadian Government to produce Military receivers.  During these years, the receivers were built on specifications provided by the Government (‘Reception Set VRL’ pictured here).   Therefore, it is not unusual for that period of time, to see military receivers from different suppliers look very similar.  In 1946, the name of the Corporation was changed from ‘Vancouver Radio Laboratories Ltd.’ to ‘Chisholm Industries Ltd.’  At this time, the company began focusing on the production of table radios, radio-phonograph ‘combination sets’ and, in 1953, they added black and white television sets to their product line.

In the spring of 1947, the company suffered a serious fire loss, which hampered production for nearly two years.  However, Edward Chisholm was a persistent man, and moved forward with his vision.  In 1950, he purchased 23 acres of land in Port Moody.  The city of Port Moody is located East of the Vancouver, located at the end of Burrard Inlet, about 30 minutes drive from downtown Vancouver.  The Port Moody facility was a huge state-of-the-art complex had a floor area of 56,000 square feet.  This new location had excellent transportation access for, road, water and rail.

The Port Moody plant construction started in 1954 and was completed in 1955. 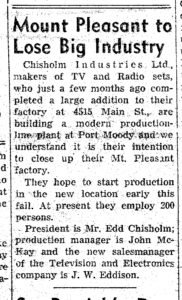 The new facility was partitioned as follows:

The building was a unique design for the day: the office block was a steel frame building with some masonry construction of 2 floors and the main plant building was of timber construction with a width of 100 feet, giving 50 foot clear spars and a height beneath the lower cord of the truss of over 14 feet.  The plant portion of the building was heated by an external  steam boiler house, and the office and engineering block had a separate heating plant.  At the time of this writing in 2008, the plant building is still in commercial operation with new tenants.

The sheet-metal shop was equipped to manufacture a wide range of metal products which could be made from medium sheet material up to 1/8” plate.  The shop had five punch-presses from 70 tons down to smaller sizes. The cutting shears would handle sheet stock up to 4 feet in width.  Also included in the sheet metal shop was a wide variety of other tools, including lathes, universal milling machines, heat treating devices, drill presses and various jig borers.

The paint finishing area had two large self-contained spray booths and several hundred feet of conveyor for handling cabinets and other products.  Also included was a large baking oven for baking finishes on metal products. 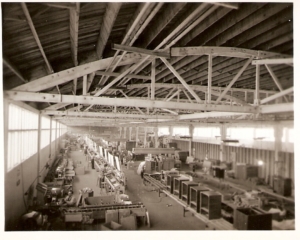 The cabinet-woodworking section had machines for every type of operation for manufacturing high-quality cabinets or furniture, including belt sanders, drum sanders, jointers, mortising machines, rip saws and equipment necessary for the pressing of veneers to hardwood cabinets.

The plant had the capacity to produce 200 units per day on the assembly line process.

Edward Chisholm did his best to produce and sell a high quality product.  His plant went beyond that of most of his competitors.  All metal chassis were cadmium plated before components were installed.  The wooden cabinets were marketed as having the famous ‘Moisture Barrier System’.  This was a technique that involved heating the cabinet wood materials to reduce the moisture content before construction.  Sales literature of the time claimed that this process reduced the possibility of cabinet’s warping in the ‘west coast damp climate’.

The Chisholm product-line were sold in a lot of retail outlets that sold furniture.  Some of these included; Eatons, Hudson Bay, Sears, Woodwards, Wosks, and many smaller family owned furniture businesses.  However, for the most part, the Chisholm product was sold under the ‘Chisholm’ brand-name.  However, there were a couple of exceptions made in favour of retailers, where a ‘stencil line’ (re-branded) product, was produced.  Jim and Sherry Chisholm believe that Woodwards may have been one of those firms.

In the early 1960’s, colour television was becoming very popular, and the market place was very competitive.     As Edward Chisholm was nearing retirement age, and the cost of re-tooling for manufacturing colour television sets was enormous, he elected to close the business and retire.

The Port Moody plant actually closed early in 1964.  During the plants manufacturing days, it was known as a place that produced high end products, and well trained staff.  The cabinet quality of the Chisholm product line was well known in the industry.  During the last year of operation, they produced cabinets for other manufacturers.  As an example, many box-car loads of  cabinets where shipped to Bell and Packard in California.

When the plant closed, the tools and equipment were sold off, with the exception of the metal fabricating shop tools.  These followed son Jim to the Glenayre manufacturing plant in Burnaby.  The Port Moody Plant was rented out to commercial tenants. 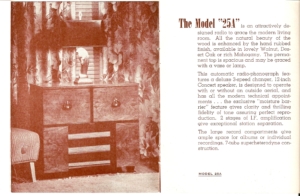 Edward Chisholm passed away in 1968, still a young man by today’s standards.  The following is a brief insight as to Edward Chisholm’s passion for life and hobbies, as recalled by his son Jim.

Edward Chisholm was a keen boater, and an avid outdoorsman.  Jim Chisholm, said that his dad “would buy a big old sailboat needing lots of repair, bring it home, and have some of the ‘shop boy’s’ fix it up and fit it out, then go sailing and take us two boys as deckhands to do the heavy work”.

Jim Chisholm fondly remembers his dad Edward, known as ‘Edd’, going to England, and purchasing an iron hulled racing sloop which was built in 1925, that someone was living in on in the Thames river. This sloop was reported to have been owned at some time by the famous movie star Errol Flynn, and even had a fireplace in the main salon.  The sloop was brought back to British Columbia, refitted and used by the Chisholm family.

Jim Chisholm also reports that his dad was an keen hunter and competitive skeet shooter.  The family had a place on Quesnel Lake, near Horsefly, British Columbia.  Jim has many fond memories of the hunting and skeet shooting trips to the interior of British Columbia. 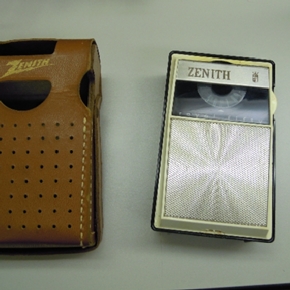