Valved Eddystone radios contain several types of fixed capacitors (caps). After several decades of continuous or intermittent use or non-use/poor storage conditions, many of them may have become faulty; commonly losing capacity, or becoming ‘leaky’ (measurable resistance much lower than expected for a particular dielectric type), open or short circuit. This is not surprising – who would have thought, for example, in the late1940’s through mid-1950’s that the S640’s, S740’s and S770R’s then in operation in commercial or amateur use would still be in service in 2006? I would suspect that even 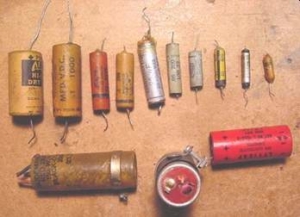 high quality radios such as the various Eddystone models, would have anticipated working lives of little more than a decade at best (not six decades or more!) – in my view it’s quite remarkable that some of the components in these radios, manufactured using primitive materials such as oil impregnated paper, cardboard, wax and rubber, often subject to high temperatures and voltages are still functional at all.

The problems that develop in caps are usually caused by the encapsulation and/or sealing materials having become unreliable over prolonged periods of time due to effects of heating/cooling, moisture or direct mechanical damage, resulting in changes to the electrical properties of the caps dielectric material. Alternatively, the dielectric may have
A selection of ‘failed’ caps removed from valve radios (alas, not all Eddystones…)

We hope you have enjoyed reading this article sample. Members of the Canadian Vintage Radio Society (CVRS) can download the entire article for free from the CVRS website here (You must be logged in first).

Because these cookies are strictly necessary to deliver the website, refuseing them will have impact how our site functions. You always can block or delete cookies by changing your browser settings and force blocking all cookies on this website. But this will always prompt you to accept/refuse cookies when revisiting our site.

These cookies collect information that is used either in aggregate form to help us understand how our website is being used or how effective our marketing campaigns are, or to help us customize our website and application for you in order to enhance your experience.

If you do not want that we track your visit to our site you can disable tracking in your browser here:

The following cookies are also needed - You can choose if you want to allow them: